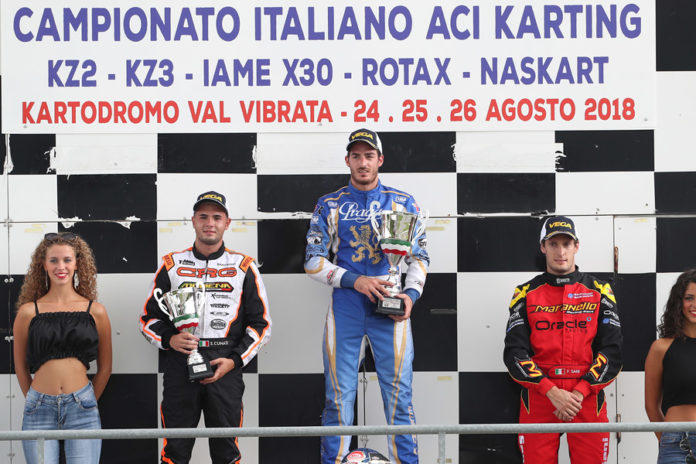 A frenetic week for all the Galiffa Team playing at home, on the Circuit Val Virata, the sixth round of the Italian Championship.

To be distinguished in KZ2, Francesco Celenta, who from the qualifying tests conquers the second half and the two eliminatory heats. After arriving at the closing session on Sunday Francesco Celenta continues his conquest, winning race 1 and finishing fourth in race 2.

A difficult round of Championship for the leader in the standings, Giacomo Pollini, who after winning the third position in qualifying has problems in the heats that compromise the evolution of the races. In Sunday’s races, Pollini, who started in the rear, leads a comeback race, finishing twelfth in race 1 and in the sixteenth in race 2. It is a pity for him to see the leadership position that he deservedly won in the previous championship trials. The top-class Davide Forè is always at the top. After sixth place in race 1 he climbs on the second step of the podium in race 2. The other motorized KZ2 drivers Galiffa, Balbo, Salmaso, Sotiropoulos, Mazzucchelli, Beloved and Attianese can easily manage this second round of the championship.

In the KZ3 Junior the drivers with the Galiffa engines, despite the meteorological uncertainty, did not lose heart. Very well Edoardo Tolfo who wins a good eighth place in race 1 and goes to win undisturbed the race 2. Loddo Gianmarco, fighting, closes tenth in race 1 and fifth in race 2. Less fortunate but always fighting the drivers Mariani Lorenzo, Alessandro and Riccardo Salvatore Loddo.

In the KZ3 Under the driver Riccardo Nalon, ninth in race 1 then goes on to conquer the third step of the podium in race 2.

In the KZ3 Over category, Riccardo and Jonni Loddo win the first and second place in qualifying. Loddo Jonni in the race 1 salt on the third step of the podium, a shame for the race 2 that difficulties forced him to settle for the twenty-first position. Loddo Riccardo after pole position in qualifying, less lucky in race 1 and 2, he finishes sixteenth and fifteenth.

Also the other drivers of Team Galiffa, Civita and Cialini, have been able to juggle the home circuit with good timing.