Galiffa Kart
Home Races The Galiffa engines at the South Garda Karting for the WSK Open... 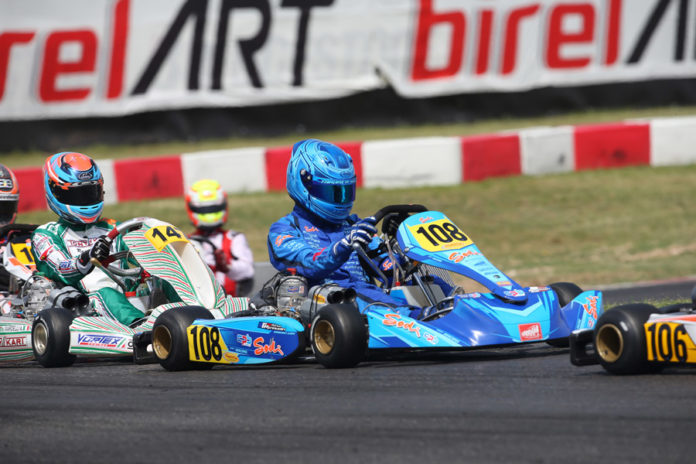 On the South Garda Karting Circuit last weekend was held the appointment with the WSK Open Cup 2018. To compete with the engines Tm by Galiffa: Renaudin, Valenti, Hall, Leuillet, Benavides, Garifullin and Fontaine in KZ2 and OK Lanz Fabienne.

In a race, where the high professionalism and competitiveness are decisive, the Galiffa motorized drivers have been competitive throughout the weekend.

A performance Marco Valenti, new in international competitions KZ, did a good job as well as the Ward driver, Philip Hall, who competed for the first time with the Galiffa Engines.

Well also Renaudin who recorded the second best lap in the race. Renaudin, among the first in the heats, in the pre-final he was sixth when a technical problem made him back in twelfth position. In the final, twenty-fourth on the starting grid, the CPB driver made a great comeback crossing the checkered flag in thirteenth position. Leuillet and Philip Hall, seventh and eighth in the pre-final, had a contact that forced Hall to withdraw from the race, thus having no chance of gaining access to the final. Leuillet, on the other hand, finished the pre-final in eleventh position and in the final with a contact on the fifth lap interrupted the race in advance. Good performances by Brad Benavides, Kamil Garifullin and Paul Fontaine.

Combat in the OK category, Lanz Fabienne, who knew how to keep up with his colleagues.

A weekend all in all positive for the engineer Galiffa who returns immediately to work for the next weekend with the fourth round of the 2018 Italian Championship on the Lonato circuit.