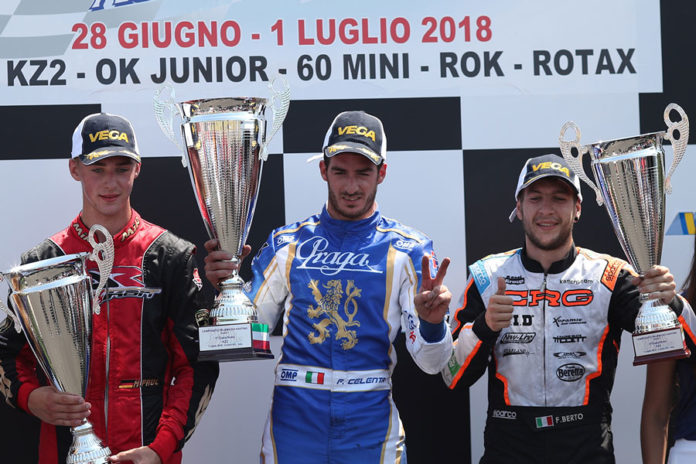 Sunday, July 1, SOUTH GARDA KARTING, under a hot sun was held the 4th round of the Italian Championship. For this 4th round, as many as 13, the Galiffa motorized drivers, each of them helped to make this race satisfying and stimulating.

A fierce Francesco Celenta is back at the top.

Celenta has taken possession of the first positions since qualifying, as well as in the qualifying heats, winning them all.

Celenta could not disappoint in the final stages, so he gave all those who work with him and his fans a nice victory in race 1 and a third place in race 2.

Also Giacomo Pollini has been the author of a beautiful weekend in the first positions since the tests, good results in the qualifying heats. The NGM driver then confirmed his good performance in race 1 finishing 6th and 5th in race 2. A good result for him that confirmed him as Championship Leader.

Davide Forè very well in the heats, always in the top positions, but sin in race 1 ended last due to a contact. For the excellent home rider comeback in race 2, last party, he came 13th under the checkered flag.

The performances of Bernardotto, Benavides, Balbo, Calà, Nilsson, Durante, Amati and Peklin have also been very satisfying, and have established themselves throughout the weekend in the many disputed races.

Too bad for Casolare, Meyuhasand Attianese, despite their competitiveness, they could not take part in the final stages of Sunday.

Next meeting on this circuit for the Galiffa engines July 14-15 for the 2nd round of the European Championship.