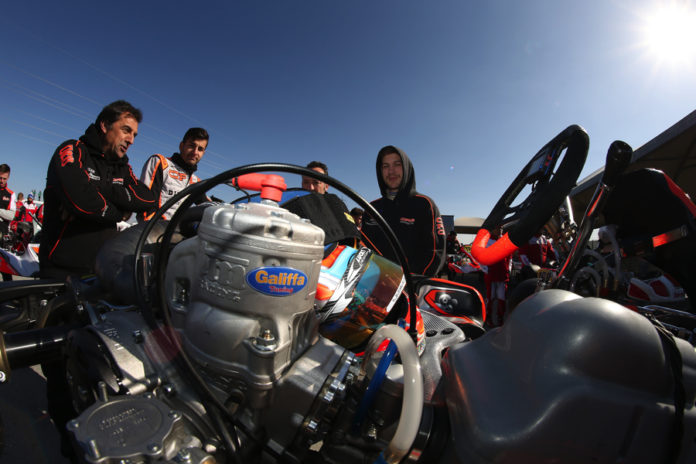 At the South Garda Karting the first round of the WSK Super Master Series KZ2 ended last weekend.
On the track to fight the best result the motorized drivers Galiffa, Pollini, Berto, Lorandi, Sotiropoulos, Valenti, Marseglia, Sjokvist, Nomblot, Giannoni, Johansson, Ratl, Luyet S., Luyet J., Tornqvist and Nilsson.
Giacomo Pollini, with the 6th absolute time, fight in the heats for the first positions. The NGM rider, who finishes 7th in the pre-final, is unfortunately forced to retire due to a contact in the final.
Very fast Alessio Lorandi who recorded the best lap of the whole event (46.526). Lorandi in the pre-final started in 14th position and finishes 6th then, some difficulties in the final crosses the 16th line. Too bad for the CRG driver, Jean Luyet, in the first 8 positions in the heats, 7th in the pre-final he had some problems. They then distinguished Nomblot, Valenti, Giannoni, Johansson, Sotiropoulos and Nilsson who had access to the final.

Next meeting in Sarno with the 2nd round of the WsK Super Master Series KZ2.