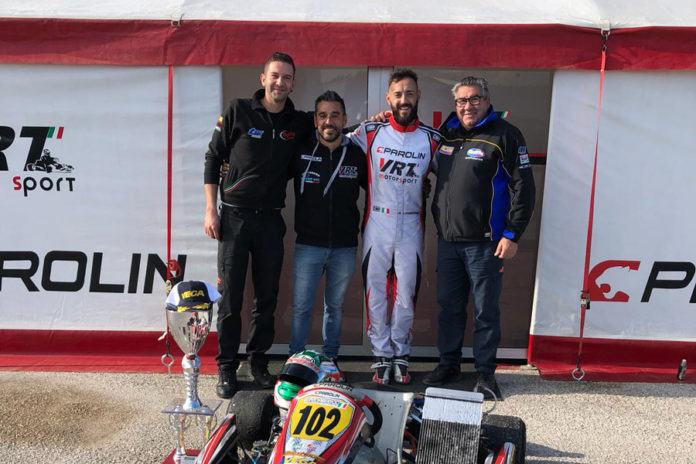 On the Sele Circuit of Battipaglia, the Abruzzese engineer won the Italian Cup titles in the categories KZ2, KZ3 Junior, KZ3 Under and KZ3 Over.

KZ2. Angelo Lombardo is a weekend showman who, from the time of qualification, imposes his presence at the top, earning the 2nd time. Lombardo wins both qualifying heats, thus obtaining the pole in the prefinal. In the prefinal excellent race of Lombardo that is imposed by crossing the finish line first. Same script in the final where the Sicilian driver holds the first place tightly under the checkered flag. Another KZ2 driver motorized Galiffa, Salvatore Gentile, gains good positions in the two heats, respectively 4th and 6th after the 9th time in qualifying. In the last phases of Sunday Gentile conquers the 7th place in the prefinal and the 10th place in the final. Good for the whole weekend also Samuele Mizzoni who crosses the finish line 3rd.

KZ3 Junior. The protagonist of KZ3J Federico Fasano, after the 2nd time in qualifying, won both races and then won the title with the victory of the prefinal and the final.

KZ3 Under. Also in the KZ3 Under there was no lack of satisfaction for the Galiffa engines with Esposito Lorenzo, pilot of the LG team. Esposito conquers the position at the top in the times of qualification and not the spring more until the checkered flag of the final. Good comeback in the final for Matrone who finishes 6th despite the initial stages had started quietly.

KZ3 Over. Great weekend for Schiano, started with the 1st time in qualifying, winning the title of the Italian Cup in its category.

Very good Alberto Cialini, with the 3rd place in qualifying, the 2nd and 3rd place in the prefinal and final.