Galiffa Kart
Home Gare The Galiffa Engines take the podium of the First Round of the... 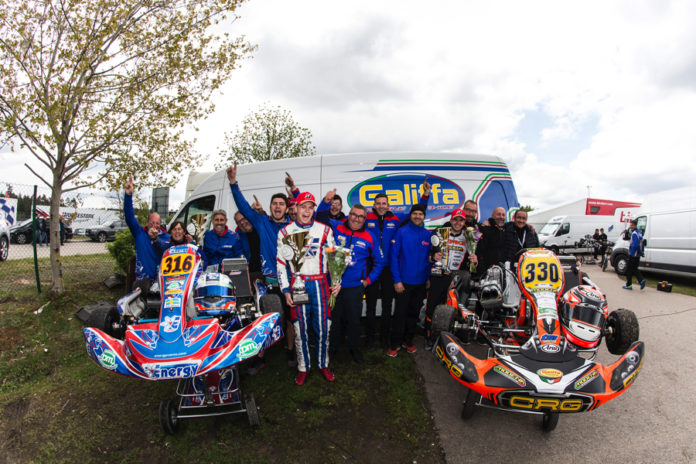 A great start for Galiffa that, with Skaras and Cunati, sees his engines on the highest steps of the podium and at the top of the provisional championship standings.

Emil Skaras. Virtual leader, he has shown himself to be a protagonist right from qualifying with the 3rd time and from the 3 heats he won and winning in the other 2 third places. In the final Skaras, first at the green light, consolidates his position for all 26 laps.

Simone Cunati. The 1st time in his group’s qualifying allows him to start 1st in all the heats where with the second and third places he wins the 4th box on the starting grid in the Final.

For the last phase of this first round Cunati with excellent timing goes to take his second position.

Giacomo Pollini. A positive first round of the season also for the driver from Brescia who wins one heat and in the other wins a second place and two fourth places. Too bad for him that a withdrawal from a heat forced him to start in 15th place in the final but with an excellent comeback he went on to take the 6th position.

Good performances by Jean Luyet, Filippo Berto and Leonardo Marseglia, who at every heats, very combative, tried everything and for the whole climb to the best possible positions. They conclude this first test in 17th, 21st and 24th position.

Too bad for the rider Jean Nomblot, forced to retire, for not being able to complete the race. The CPB driver, who had good times from the heats, could have crossed the checkered flag in a good position, as well as for all the other drivers who did not have access to the final.