Galiffa Kart
Home Gare The Galiffa engines start the 2019 season with the 24th edition of... 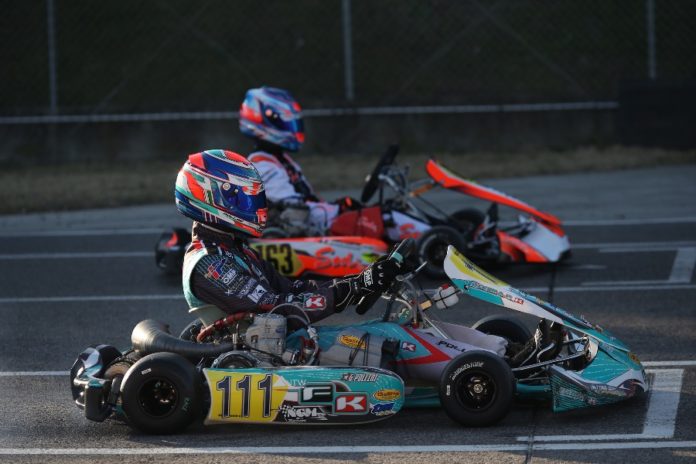 The 24th Winter Cup marks the opening of the international season, with the participation of no less than 99 riders only in KZ2.
In the most performing category, the presence of World and European champions and Formula 2 drivers, among which Alessio Lorandi, motorized Galiffa for this event, make everything more competitive. At the South Garda Karting also the 2018 Italian Champion, Giacomo Pollini, with the Galiffa engines, has recorded excellent time since qualifying and then become one of the protagonists of the weekend. The 2nd best time earned Pollini the first row in the Heats where he won a manche on Friday and a manche on Saturday. In the final stages of Sunday, the motorized driver Galiffa wins the Super Heat and in the final, in a bagarre with the Big, crosses the fourth finish line. Too bad for Pollini then, which penalties make him back in the standings.
Good start of the season for the Energy driver, Emil Skaras, who with the Galiffa engines recorded the best lap in qualifying and positioning himself in each of the heats in the first 4 positions.
A little ‘less lucky in the Super Heats and in the final, Skaras concludes the first race of the season in 13th position.
Good times for Jean Luyet, combative in qualifying and 8th in the Super Heat he met some difficulties in the final where he finishes in 24th position.
Unlucky qualifying for Lorenzo Giannoni then in the Super Heat started in the rear, recovering several positions crossing the finish line 13th.
Positive the timing of Baciuska, Lindholm, Nomblot, Valenti, Berto, Hall, Ratl, Luyet S, Mihic, Totnquist, Sjokvist and Marseglia.