Galiffa Kart
Home Races The Galiffa Engines on the podium KZ2 of the 1st Rd of... 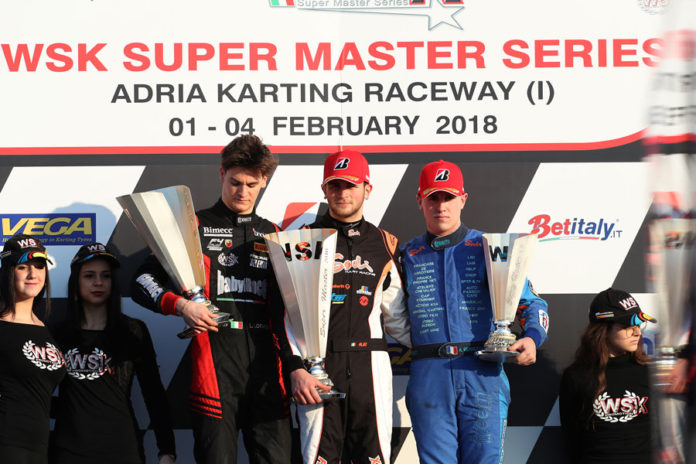 The Series of competitions on 4 appointments of the WSK Super Master Series has had beginning on the Adria Karting Raceway where the preceding  week end has departed the international karting season with the single test of the WSK Champions Cup.

To compete with the Galiffa engines the drivers Renaudin, Lorandi A, Lorandi L, Leuillet, Benavides, Nomblot, Auer, Arnaud  (KZ2) and  Lucertua in the Mini category.

A big Renaudin, author of a third place to the WSK Champions Cup, has done his the second and third position in the manches, the first position in the prefinal and the third  in final.Lorandi Leonardo, F4 driver, among the first  in the manches  has arrived fourth in prefinal and conducting a good final has done his the second step of the podium.The French driver Leuillet, second to the WSK Champions Cup, has had a weekend enough difficult however he has succeeded in making some cronos making to record the best lap (52.085) in the  qualifying practice. Leuillet after having found the correct competitiveness has had to abdicate the final because of a mechanical breakdown but it was surely a candidate to the Top Five.Another candidate to the group of the first  was Alessio Lorandi, if Saturday he had not had a technical problem that has compromise the result of the competition.An accident in the tests of Friday has prevented Benavides to compete, luckily nothing of serious, only the regret to have missed the first round.Nomblot, considered his inexperience, has conducted a good competition and his improvements and the cronos they do well to presage for the future competitions.

After the Venetian Circuit, to entertain the 2nd Round of the WSK Super Master Series will be the Circuit of Lonato in the week end of March 4th. In attends him of the 2nd Rd, we will be to Lonato for the Winter Cup on February 15-18 2018 for another charming challenge.