Galiffa Kart
Home Gare The Galiffa Engines in Adria for the final stages of the WSK... 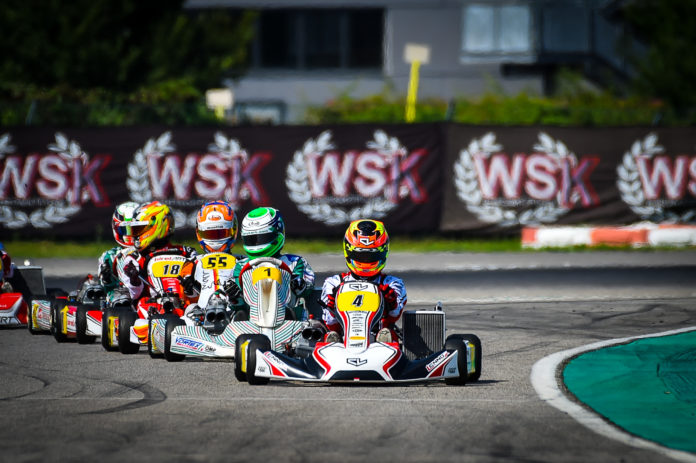 On the Adria Circuit, the one just ended has been an intense week that has brought together the last 2 Rounds of the WSK Super Master Series. The drivers Gustafsson, Ippolito, Marseglia, Bizzotto, Valenti, Nilsson, Carbonnel, Lomko, Imbourg and Pokos compete with Galiffa engines.

Since the early days we have recorded excellent timing, which emerged in qualifying, with Gustafsson’s pole in both rounds. The heats also did well, where the Swedish driver won one manche of the  round 3 and two of the round 4. Good performances by Ippolito, Marseglia and Bizzotto always in the top ten of the heats and of the other drivers, authors of overtaking and comebacks towards the most desired positions. In the final stages of the 3rd round, Ippolito crosses the prefinal checkered flag in second position, followed by Gustafsson in P4, Bizzotto (P7), Marseglia (P9), Carbonnel (P10), Valenti (P12), Nilsson (P13), Imbourg ( P14), Lomko (P16) and Pokos (P17). In the final, Ippolito finished well in P4 and Gustafsson in P7, too bad for the other drivers who had some difficulties that did not allow him to finish with a good result. In the prefinal of the 4th round Gustafsson is fourth but penalties make him retreat in 10th position, Marseglia well who finishes in a good 7th place, followed by Valenti in P 9, Nilsson (P12), Lomko (P13), Imbourg (P15) and Pokos (P17). Unfortunate Ippolito who is out, as well as Carbonnel and Bizzotto. The final was difficult for our drivers who had to work hard to conquer as many positions as possible. Sin x Gustaffson, among the protagonists of the week, not being able to aspire to the top positions, closing tenth, followed by Ippolito (P15), Pokos (P18), Imbourg (P19), Lomko (P20), Bizzotto (P22), Nilsson ( P25).