Galiffa Kart
Home Gare The Galiffa engines first and second in KZ2 at the FIA karting... 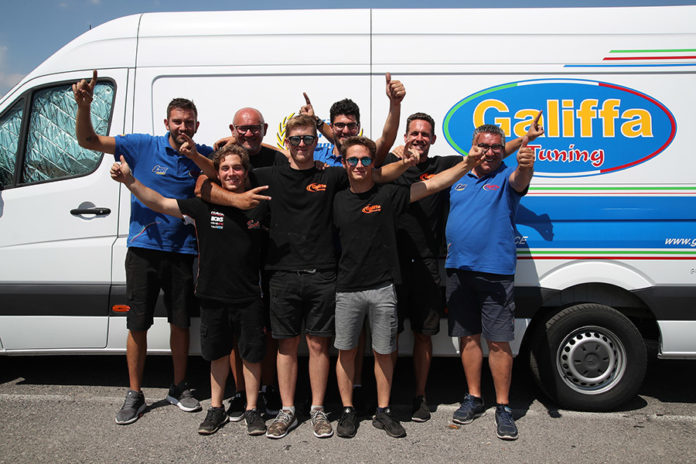 The Galiffa engines in Lonato win with Renaudin and Pollini the KZ2 European Championship 2018.
A weekend, the one spent, full of satisfactions for the Galiffa kart that conquers one of the most important titles of the year.

The Abruzzese engineer climbs on the top step with the CPB Team driver, Adrien Renaudin. The French driver who in the first round of the championship from the pole goes to win undisturbed on the Salbris circuit, in Lonato adopts a defensive race strategy to not compromise the victory of the title, trying to win valuable points and avoid penalties and contacts.

Great satisfaction also by the vice European champion, Giacomo Pollini, who plays the last round at home where very fast in the times, wins 2 heats and in the final with a little difficulty closes in fifth place, obtaining important points that confirm him just vice champion .

The engineer abruzzese has touched the hat-trick of championship with Loubere that despite to Salbris had made the difference climbing on the second step of the podium, to Lonato for a series of circumstances did not reach the necessary score to conquer the third place in the championship.

The other motorized drivers Galiffa, Leuillet T., Benavides, Valenti and Balbo also played a good job, and at Lonato they took part in the final with good performances. Good times for Leuillet G., Nomblot, Fontaine, Bernardotto, Prosperi and Ojaranta who unfortunately did not have access to the final.

In Kz, the driver Henri Kokko with the Galiffa engines knew how to deal with the high professionalism and competition that the European championship reserves. Kokko with a good pace finished in fifteenth position in Lonato, a good result considering it was his first race of the season.

Gianfranco Galiffa, with satisfaction, thanks TM Racing for the constant support, Team CPB, NGM, CRG, PRAGA, SODI,NINAR. Thanks to the European champion Adrien Renaudin, the vice champion Giacomo Pollini and all the drivers and mechanics.

Many thanks to Elvezio and Dorin for their precious work.