Galiffa Kart
Home Gare Successes for the Galiffa engines in the first round of the Italian... 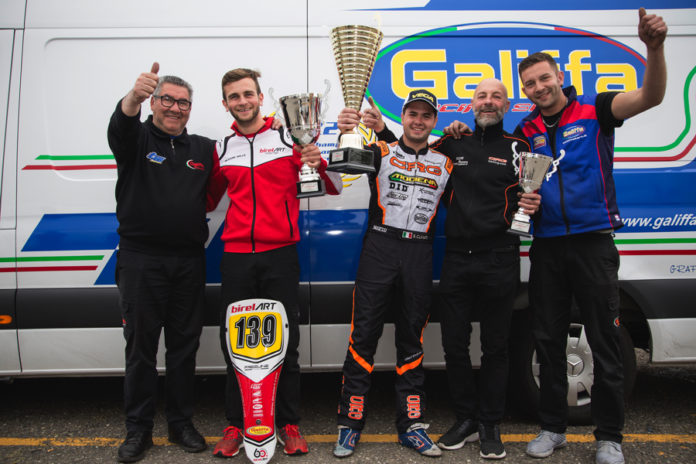 In Castelletto di Branduzzo for the first round of the Italian Championship the Galiffa engines win, in KZ2, race 1 and 2 with Cunati and Irlando.

A profitable weekend for the engineer who brings his engines to pole position and to win both finals.
In race 1 Simone Cunati, 6th on the starting grid, took the first position on the 14th lap where he went on to win. It is a pity for Riccardo Cinti who saw the possibility of completing the race due to a withdrawal disappear from the 3rd box on the starting grid.
A pole-performing Alex Irlando, despite starting from 19th position due to a retirement and a penalty in the heats, made an excellent comeback, winning positions lap after lap and crossing 3rd the checkered flag. Too bad that for another 5 seconds of penalty Irlando is seen to be back in 9th position.
A difficult weekend for Di Lorenzo who, a bit unlucky, was forced to 2 retirements in the heats but who then redeemed himself in the repechage with a 2nd place and with an excellent comeback in race1. For Di Lorenzo, to score this start of the championship, another retreat in race 2.
In race 2 an exceptional Irlando rising from the ninth position to the first step of the podium. Simone Cunati, winner of race 1, finished with an excellent 3rd position and won the provisional championship lead.
Good performances by the other Galiffa’s drivers, Nilsson, Vigorito, Mizzoni, Mazzucchelli, Bartolini, Lanz and Lapina who did a good job all weekend, laying the foundations for a competitive Championship.
In the 60 Mini the Galiffa engines started the Championship with Olivieri, Larini, Luvisi and Fracassi.
The little drivers were compared on the 7 Laghi Circuit with good performances but, for some of them, they were not enough to access the finals.

Next meeting with the second round of the Aci Karting Italian Championship on the Siena Circuit on 7-9 June.