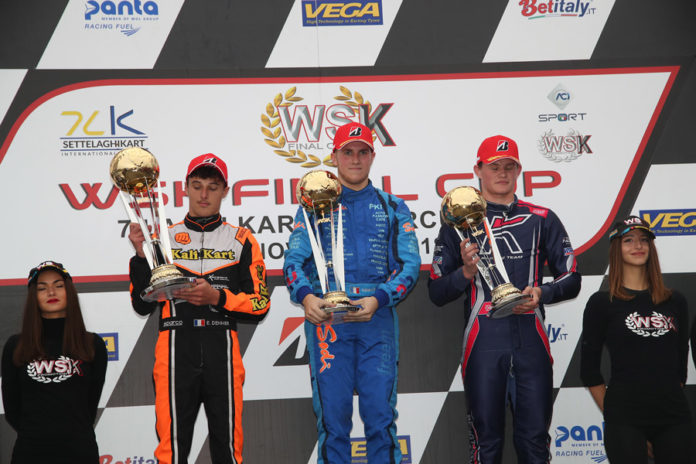 Adrien Ranaudin is the undisputed protagonist of the 2nd round of the Wsk Final Cup on the Circuit 7 laghi of Castelletto di Branduzzo.

The motorized driver Galiffa, after the pole position in qualifying, won the heats on Saturday winning the pole in the pre-final. Renaudin in the prefinal prevailed throughout the race by crossing the checkered flag first. In the final, the CPB driver, who started well, was 1st when an inconvenience made him lose positions but it was from 6th position that Renaudin started his comeback up to recover the leadership. An excellent weekend for the French driver who with his victory upsets the championship standings by going to the top with 111 points.

A good weekend also for Ratl who, 5th in qualifying and fighting in the heats, starts from the 2nd line in the prefinal. In Sunday’s races, Ratl, in a tussle with the front group, crosses the checkered flag between 5th and 6th. Well also Valenti who, despite some difficulties in the heats, has well recovered in the prefinal and final placing 7th and 5th. A performance Ariel Levi, returning to the races after a year of stop, made his 2nd position in qualifying. Too bad for Levi who started to have some problems from the heats, which forced him to abandon both Sunday races in advance. Good performance by Martin Mihic, combative ended prefinal and final in 9th and 8th position.