Galiffa Kart
Home Gare Numerous Galiffa’s drivers at the South Garda Karting for the 1st Round... 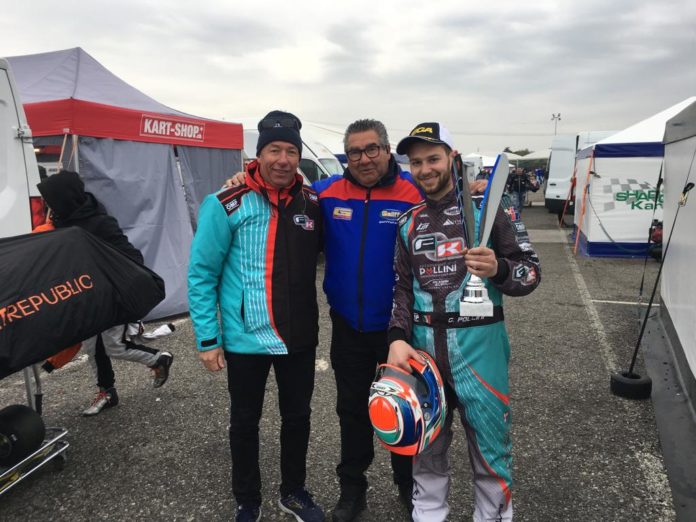 The first round of the German championship on the South Garda circuit in Lonato ended on Sunday 14th April.
As a famous proverb says … wet round lucky DKM. And yes, the German championship for Galiffa engines that had to compete under water started quite well.
In the DSKC category, a sparkling Natalia Balbo won the pole in the first heat, winning a 5th place in the second heat and the 6th place in the general classification.
On Sunday, Balbo wins round 2 and wins the prefinal, but unfortunately he is disqualified at the end of the match for underweight.
Numerous Galiffa motorized drivers in the DSKM category. Start of the lucky championship for Giacomo Pollini, 5th time in qualifying. Pollini winner of run 1, fourth in the second run.
Sunday starts in the rain, but it doesn’t seem to bother Pollini much, finishing third in race 1 and fourth in race 2.
Good also the other drivers who have relied on the hands of Gianfranco Galiffa, Nomblot in the elimination rounds conquers the 3rd and 6th position, well also Marseglia, Torqvist and Baciuska, present in the top ten.
DKM not started very well for Luyet, Ratl and of course, a bit unlucky in this appointment, but the championship has just started and they will have time to redeem themselves.