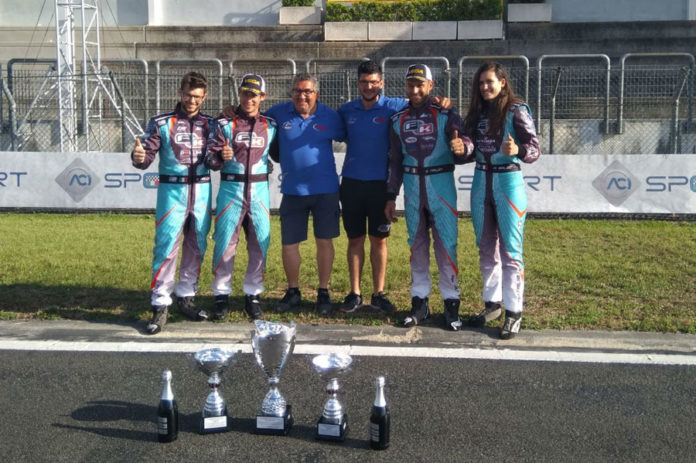 An excellent start to the championship for the Abruzzese engineer who sees his engines as protagonists in KZ2, KZ3 JUNIOR AND KZ3 UNDER.

Giacomo Pollini, of the NGM Motorsport Team, after having recorded the pole position and having won both the qualifying heats, crossed the finish line first in the first race. Authors of a great performance Alexander Dahlberg and Davide Forè, drivers of the new AM Motorsport Team by Marco D’antoni, they closed race 1 in the fourth and fifth position. Too bad for Francesco Celenta who, after some unfortunate heats and started in the rear, crashed into an accident during the comeback. Good timing of Giorgio Amati, a beginner in KZ has recorded quick laps with the first can, positioning twelfth in race1 and twenty-eighth in race2. Salmaso, Balbo, Casolare, Sotiropoulos, Attianese, and Meyuhas are also good. In race 2, with the grid reversed in the first 8 positions, the engines Tm By Galiffa rise on the third step of the podium with the multi-champion Davide Forè. Fifth the Swede Dahlberg, sixth Pollini, Celenta, again involved in a contact while he was making his comeback, ended in a good seventh place. In the top ten also Salmaso.

In KZ3 Junior Edoardo Tolfo, after the fourth place in race 1, wins in race 2. Loddo Gianmarco, second in qualifying and second in a heats, unfortunately did not go very well in race 1 but is redeemed in race2 closing in a good fifth place. Good Loddo Alessandro who knew how to manage well despite his first weapons in KZ.

In KZ3 Under a fast Riccardo Nalon, after having won one heat and placed seventh in race 1, crossed the finish line first in race 2.

In KZ3 Over the motorized riders Galiffa, Borghi, Cialini, Loddo Riccardo, Loddo Jonni and Shiano di Cola, have recorded good timing in qualifying. Discrete the heats where, Riccardo Loddo concludes third in one. Bene Cialini in race 1 closes in seventh place and Borghi in race 2 crosses the finish line in a good seventh place.
Next meeting in Sarno with the second round of the Italian KZ2 Championship.