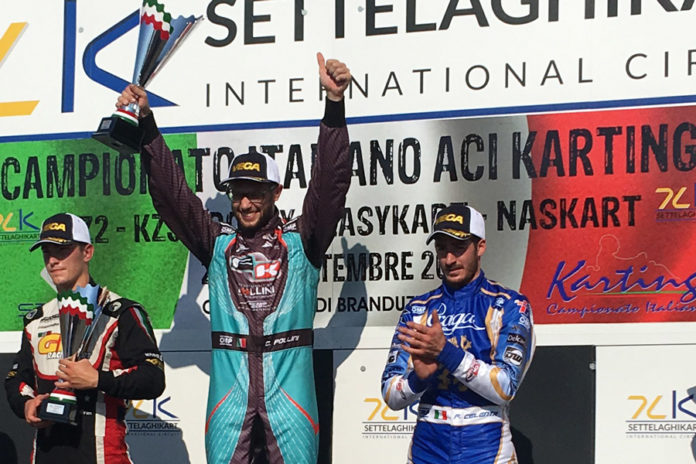 The decisive weekend was that of Castelletto di Branduzzo to decree the 2018 Italian Champion.

Once again the Galiffa engines under light in the KZ2 and KZ3 Junior / Under / Over categories.

In KZ2, Giacomo Pollini and Francesco Celenta, protagonists for the whole championship and fighting for the title, gave everything and for everything. The weekend was not easy, there were some situations that jeopardized the title race, especially for Celenta. Celenta, author of the pole in qualifying, in the heats 1 he recorded the best lap (46.786) where he finishes third. Too bad for the heats 2 where Celenta is forced to stop due to a technical problem. Also for Pollini some difficulties in the heats where in the first he finishes sixth and in the second he is out on the first lap for a contact. In race 1 Pollini came back to the great one by scoring the best lap (46.890) and crossing the checkered flag in fourth position. Francesco Celenta, twelfth in grid 1, recovers positions and concludes fifth. The situation after the race 1 for the title race is still to be decided between the top three favorites and for our drivers, with a few points of difference between them, we had to play with it. In race 2, excellent performance of Pollini who goes to take the first position and goes to win, winning important points that crown the Italian Champion KZ2 2018! A deserved victory, given his path during the other championship rounds that made him one of the biggest favorites for the title race. Celenta in race 2, fourth on the starting grid, at the start lost some positions but was able to recover well crossing the third goal. Too bad for the ex Italian Champion 2016 who has touched the second position in the Championship for just one point, adding to his curriculum the bronze medal. Excellent performances of Natalia Balbo and Giorgio Amati who have recorded the timing not far from the first but, unfortunately, the contacts have prevented them from reaching the deserved positions. Well also Nicola Bartolini, very fast, he knew how to deal with the drivers in the race showing to have the right step. Good weekend for Matteo Mazzucchelli, always constant throughout the weekend and present in the top ten. Less fortunate Antonio Casolare who had many difficulties and forced to retire due to a technical problem.

In the KZ3 Junior to be crowned Italian Champion 2018 was Edoardo Tolfo that with the Galiffa engines led a leading championship season. In Castelletto, Tolfo with the undisturbed victory of race 1 won the title with a wide margin of score. To stand out on the Circuit 7 Laghi Loddo Gianmarco with the pole in the qualifying and the second position in the heats 1. In race 1, Loddo combivo closes sixth and in race 2 he redeems himself climbing on the second step of the podium. Less fortunate his brother, Loddo Alessandro, that a series of contacts have placed obstacles, concluding twelfth in both races.

In the KZ3 Under, good Nalon, always in the top ten, climbs on the second step of the podium in race 2. Good time for Alacqua, in KZ3 Over, which closes race 1 and 2 in the fourth and sixth position.
At the end of the Championship, as usual, we feel obliged to thank TM RACING, the NGM Team, FD MOTORS, KCS, LG, AM MOTORSPORT, MODENA KART and the Pilots who have worked with us.