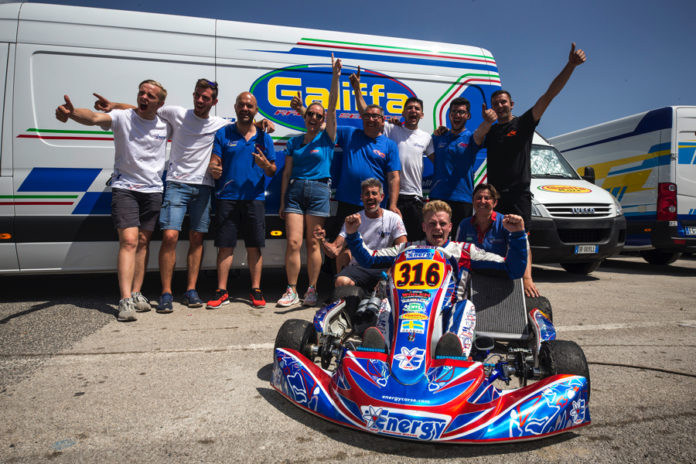 At the Naples International Circuit, the Abruzzese Engineer confirms himself as European KZ2 Champion with the Energy’s driver, Emil Skaras.

A result not entirely unexpected last weekend, given the provisional leadership position obtained in the first round of Wackersdorf by the Swedish driver.

On the Naples International Circuit, Skaras with the galiffa engines wins important points in the heats that allow it to consolidate its position in the championship so much that it was enough for him to finish 7th in the final to win the Title.

A favorable weekend for Jean Nomblot where he had his redemption after the difficult 1st round in Wackersdorf. The CPB driver, protagonist in the heats of which he wins one, in the final is deservedly his third step of the podium.

Outcome not the best for Simone Cunati. Second in the virtual ranking after Wackersdorf, Cunati unfortunately has some difficulties in the heats and sees the possibility of the fight for the conquest of the title vanish when in the Final, 28th, a contact prevents him from recovering.

Giacomo Pollini, well in the heats with a 2nd position, three 3rd position and an 8th, crossed the finish line in the Final 6th and finishing 9th in the championship standings.

A speedy Natalia Balbo, one of the protagonists of her group’s heats, unfortunately had some difficulties and in the final a contact forced her to retire.

Satisfied for having brought one of the most coveted titles of the year, Galiffa Gianfranco, thanks TM Racing, Energy Corse, CRG, BirelArt, Praga Kart, Sodi Kart, Modena Kart, NGM Motorsport, CPB Sport, KartShop, all the Drivers and its Staff for their valuable work.