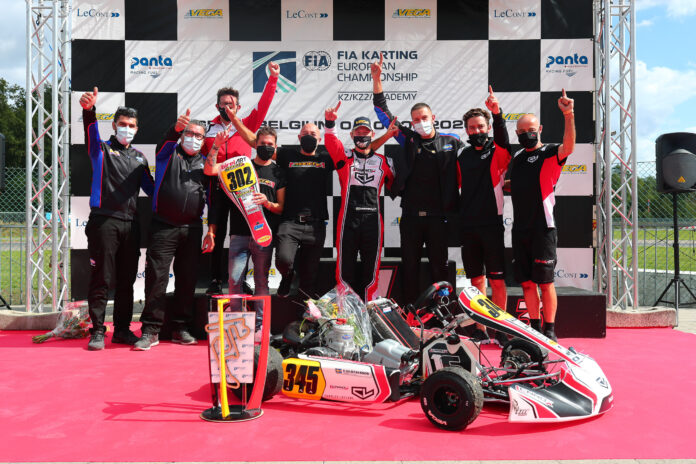 After the first round in Adria, with Gustavsson and Cunati the goal of the title became more and more concrete and both Galiffa motorized drivers were potential winners.

With Gustavsson’s Pole and Cunati’s third position in qualifying, the Galiffa engines began their tour de force. Second and fourth on the final grid, Cunati and Gustavsson, have as their common goal the victory of the title until, however, Cunati sees everything vanish on the sixth lap where he is out due to an accident. Really a shame for Cunati, but the second position in the Championship was nevertheless an excellent result.

Among the protagonists there is also Leonardo Marseglia. The Birel Art driver, fifth in the qualifications of his group, conquers the fourth, sixth and seventh position in the heats, with excellent results that allow him to start in a good position in the final and aim for the podium. Too bad then in the Final, Marseglia is out on the sixth lap. Filippo Berto also very well, seventh in qualifying for his group, unfortunately had difficulties in the heats that penalized him in the final where he starts in twenty-second position and from there he recovers reaching the twelfth, then his comeback is interrupted on the twenty-first lap due to of a technical problem.

CPB driver Arthur Carbonnel, struggling in qualifying, recovers in the heats and amazes everyone in the final where he crosses the checkered flag fourth. Veloci Valenti, Funda, Imbourg, Lomko.

Pride for Galiffa, beyond the first and second place in the Championship, is to see his riders work hard and fight to the end challenging their limits. Having four drivers in the top ten of the Championship is not only a satisfaction but also a stimulus for Galiffa and his staff to work better and better.

An exciting weekend that paid off all the energy put into the field. Galiffa thanks his staff for the excellent work TM Racing and all the Teams and Drivers who worked for a common goal.