Galiffa Kart
Home Gare En plein for Galiffa engines for the last round of the WSK... 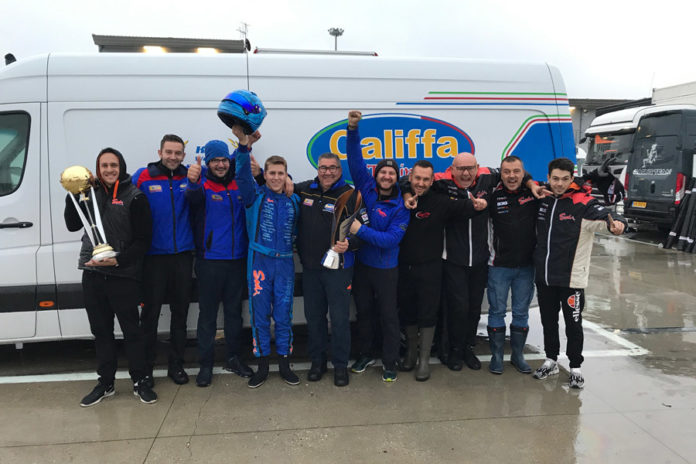 Another title is added to the palmares of the Abruzzese engineer who goes to win with Renaudin the 13th round of the WSK Final Cup.

Adrien Renaudin, in the last two appointments of the WSK Final Cup dominates rounds, prefinal and final totaling 243 points that lead to the victory of the title. For Renaudin after the successes achieved, could not miss the icing on the cake, the victory of the WSK Final Cup 2018.Great weekend for Jean Luyet, 5th in the classic final, in Adria he climbs on the third step of the podium in both the PreFinal and the Final. After a period of absence from the races, Ariel Levi, returns winning a race, proving to be performing and motivated for the 2019 season. Also for Jean Nomblot, returning after a period of convalescence, is a positive weekend. Nomblot conquers the 2nd position in the Prefinal and the 5th place in the Final.Some difficulties in the heats for Marco Valenti who recovers with good timing, closing in the final in the top ten. Competitive Mihic, well the heats, concludes 11th in the final.

Gianfranco Galiffa, satisfied with the results achieved, thanks to his almost finished season, thanks his Staff, TM Racing, all the Teams and riders who have chosen galiffa engines to get on track.

Last beats at the end of the 2018 season, Vendrell and Macau, where the galiffa engines will be busy before the Christmas holidays.