Galiffa Kart
Home Gare DKM, Kerpen: The Galiffa Engines on the Podium of the 3rd Round... 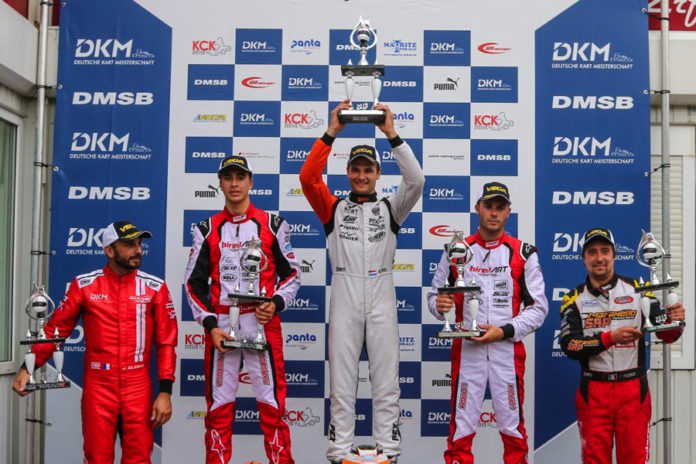 The Galiffa engines, in the DSKM (KZ2) category, took the podium with Leonardo Marseglia and Riccardo Longhi.

Leonardo Marseglia, a veteran of the victory in the third round of the Italian Championship at Sarno, is once again on the podium with the Galiffa engines. Third on the starting grid, Marseglia, at the green light of race 1, showed right away that he could fight for the top positions going to occupy the third step of the podium. The same in race 2, the Birel Art driver sets the fastest lap and in a row with the group of the first, he goes on to take the second position.

On the podium with Galiffa engines also Riccardo Longhi. Longhi, third in qualifying, concluded race 1 in tenth position and then took his redemption in race 2 with a well-deserved third place.

Busy weekend for Jean Luyet, protagonist of an accident in the heats fortunately without particular consequences. Luyet, in race 1, from the sixth row concludes twelfth and in race 2, in attack for the conquest of positions, concludes in a good seventh place.

In the other KZ2 category (DSKC) the motorized galiffa driver, Kapetanidis Konstantin, gets on the third step of the pre-final podium and in fourth position in the final.

Next meeting with the German Championship on 2-4 August in Genk.