Galiffa Kart
Home Gare To Val Vibrata double victory for the Galiffa Engines where they conquer... 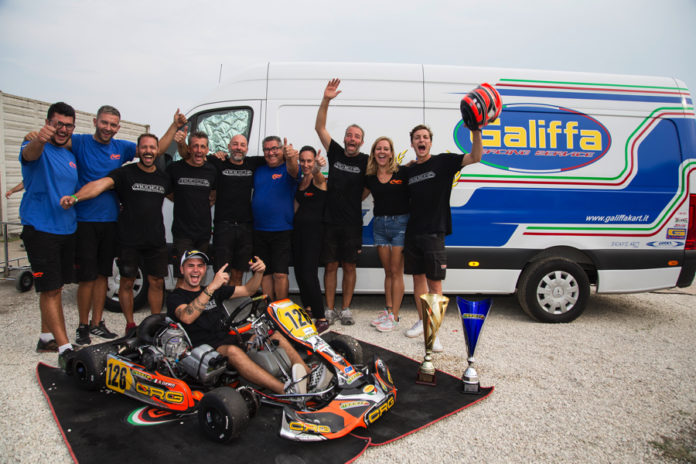 On the home circuit, the Galiffa Engineer concluded the Championship in style, winning the title with Simone Cunati (KZ2) and Marco Pagani (KZN Over). A breath away from the victory also in KZN Under, the Galiffa Engines climb the second step with Edoardo Tolfo.

KZ2. The Modena Kart driver, Simone Cunati, was also talked about this time.

Cunati, former provisional leader of the Championship, with the victory of Race 1 earned enough points to confirm his leadership and win the Title. In Race 2, with an inverted grid, Cunati from his 8th position begins his comeback to reach the lead and win also the victory of Race 2.

Among the protagonists of the Championship, Leonardo Marseglia. In the fight for the bronze medal, Marseglia, after a not so brilliant start in Race 1, recovered up to 3rd position. Too bad for Leonardo who, in Race 2, while coming back from positions, a contact prevented him from finishing the race seeing no chance of reaching 3rd place in the Championship standings.

Present at this event to better prepare for the World Championship to be held in a few weeks, Giacomo Pollini. The Galiffa’s driver brings home a good 5th place in Race 1 and an 8th placement in Race 2.

A Performer Filippo Berto who gave his best for the last Championship race, setting good times and winning the 7th position in Race 1 and an excellent 4th place in Race 2.

Unlucky weekend for Luigi Di Lorenzo where in one heat he had a bad accident. However, the Modena Kart driver managed to continue racing and in Race 1, starting from the 25th position he led a great comeback and finished 11th. In Race 2 another incident again involved Di Lorenzo, preventing him from finishing the race.

KZN Under. Edoardo Tolfo, fighting for the title, despite having put all his strength into play, was not enough and for only 7 points away, he saw the Tricolor victory vanish. Tolfo, winner of the heats on Saturday, at the green light of Race 1 is the author of the best lap and is first, so until the finish line. In Race 2, with an inverted grid, Tolfo starts at 8th where it begins its comeback until it reaches the 2nd position. A weekend, for Tolfo, really a protagonist and despite the nuanced victory, the second position is still an excellent result.

The performances of Andrea Pastorino, Lorenzo Mariani and Riccardo Loddo are also good.

KZN Over. It’s Marco Pagani who brings the Galiffa engines to the top step of the KZN Over podium. In Race 1 Pagani, 6th on the grid, green is already in comeback and on the 3rd lap he is 2nd to then aim for the highest step of the podium. In Race 2 Pagani has to settle for 3rd position but his score is enough to win the Title.

The Loddo, Jonny and Riccardo brothers fought, winning both the 3rd and 4th positions and the 4th and 9th positions in both races.

Great weekend for Alberto Cialini who after a long time away from the kart, took his 6th position in Race 1 and in Race 2, combative, got on the second step of the podium.

At the conclusion of the Championship, Galiffa can only thank his Staff, TM Racing, CRG, Parolin, Praga, Birel, Modena Kart, FD Motors, drivers and mechanics.

Thanks Simone, Marco and Edoardo!